Days of Dialogue: Police Community Relations in the Aftermath of Michael Brown and Ezell Ford 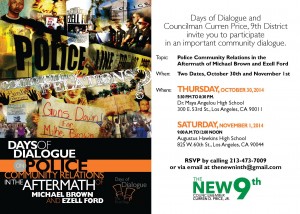 On October 30, 2014, 160 people from South LA came together for Days of Dialogue at Dr. Maya Angelou High School, to talk together of their grief and frustration in the wake of recent police killings in their local neighborhoods and nationally. Fourteen tables of community members, each joined by a dialogue facilitator, shared emotional expression and responses to experiences of ongoing police violence.

At the table I joined as dialogue facilitator, 12 youth members of South LA’s Youth Justice Coalition shared focused, intentional and thoughtful conversation. While the following day brought many more LAPD officers to the dialogue, at our table that day there were no LAPD officers present – a missed opportunity. We need to improve this process towards action steps. Ongoing dialogue must be more intentionally structured and directed between community members and police officers. These conversations will be difficult, take more time and will require brave commitment from police and community members alike to keep talking. Non-critical police aggression in circumstances that do warrant it must stop. The community is left broken and fed up while officers without the capacity for optional strategies are left frustrated and isolated from the community they serve.

There are individual LAPD Captains who are becoming open to strategies of community policing. They must be supported and trained with skills they currently do not have. The LAPD’s institutional answer that it’s only a handful of officers who need to be weeded out from the “good” can no longer justify deplorable police actions. The police are caught in systemic problems that reach back many decades with roots in complex social conditions. What is needed now is critical assessment of old beliefs and infrastructure, including how officers are trained.

To curb abusive officer actions the LAPD instituted surveillance of its own officers, including infiltration by undercover officers, and more recently outfitting officers with audio recorders and cameras to document their actions and a negative accountability system where officers compete for promotion. How does this not generate an internal climate of fear, paranoia, and frustration? Add to this mix a cultural history of bias against people of color and at risk communities that have have become dispirited after struggling with scarcity and internal violence for years, we have a formula for disaster.

Police must be trained in and rewarded for skills of bias awareness, human relationship development, and conflict engagement to truly protect and serve the community. The community wants to trust the police. The police want to be appreciated. We have to work harder together.