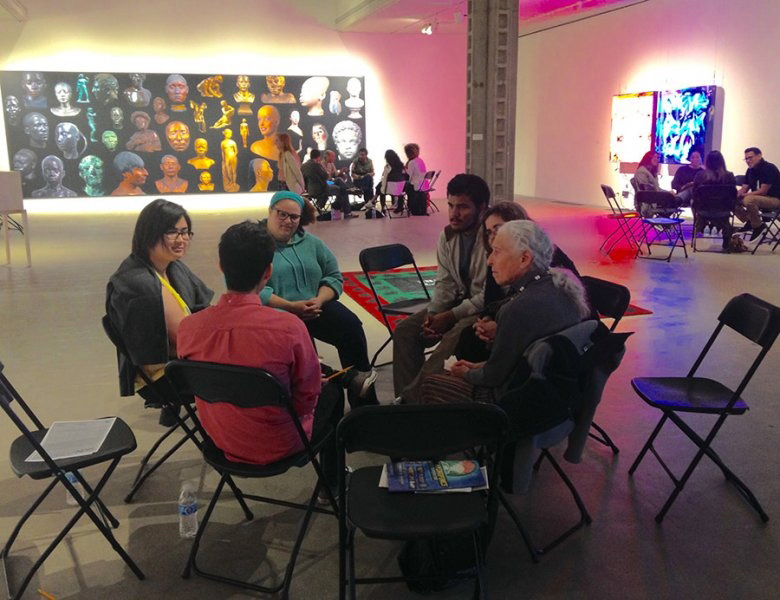 Groups of participants share their ideas on race in the gallery. Photo by Dorit Cypis.

Cypis, who is a certified mediator, commented: “The opportunity to co-organize Un-Panel 2, facilitated dialogues on race perceptions and experiences, was fabulous. We invited six artists in the SKIN exhibition to participate as dialogue facilitators, asked each to invite two of their students, and taught them all listening and procedural skills to elicit open dialogue amongst participants. Together we brought a key unspoken aspect of cultural identity–race–to the forefront of discussion on human interaction. This is a process that needs to be repeated throughout educational and civic spaces across America as often as possible.”

“This event is very timely in light of the political and cultural climate in this country right now.” said Tempo. The participants had several hours to engage a lively and thoughtful conversation about a difficult subject.

According to Isabelle Lutterodt, Director of LAMAG: “The programming for this show was very experimental for the gallery. We took a risk hoping that people and artists in the community would be interested in having these conversations. We had over 10,000 people come to see the show and I continue to hear positive things about the programming that we offered.” 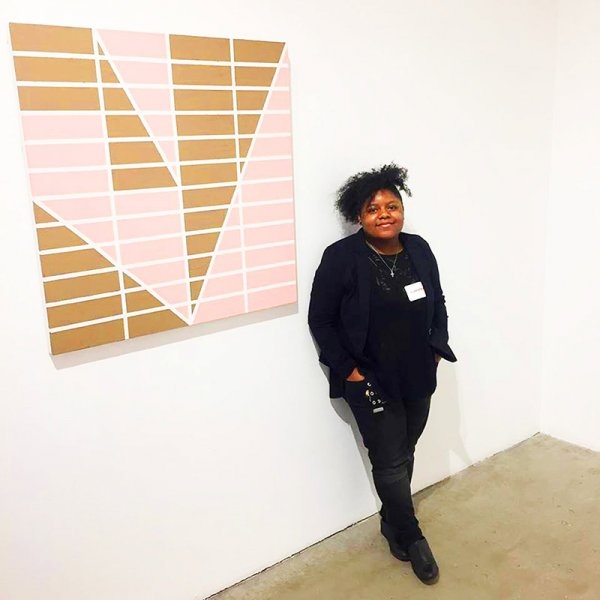 Megan Reed poses next to her painting during a reception for SKIN. Photo by Holly Tempo

Senior Megan Reed, who exhibited a painting in the show, says of the event “It was great to participate in for the reason of coming together with people who I didn’t know, to assist in facilitating a conversation that we could all resonate with. The conversation of race is so broad but so important and I enjoyed hearing from people about their personal experience and how they want to be a part of a change and a longer conversation.”

Also participating was senior Dakota Higgins who summed up his experience: “I think that the un-panel was a really key element to the show. It was really great because it allowed for people to come together and share their thoughts on the complex issues surrounding racial and cultural identities and politics. It was especially great to come together at the end and hear the kinds of conversations the other groups were having. These conversations need to happen, and I really appreciated how the work in the show facilitated and acted as a catalyst for the kinds of conversations that took place. The exhibition was dealing with ideas and issues that I don’t see many art objects fully or effectively addressing in and of themselves, so the un-panel discussions felt necessary, productive, and important. I actually see the panel as being one of the most successful works in the show for this reason. I know I got a lot out of it, and will hopefully be able to take some of what I learned with me forward to help create the kind of change an exhibition like this seems to call for.” 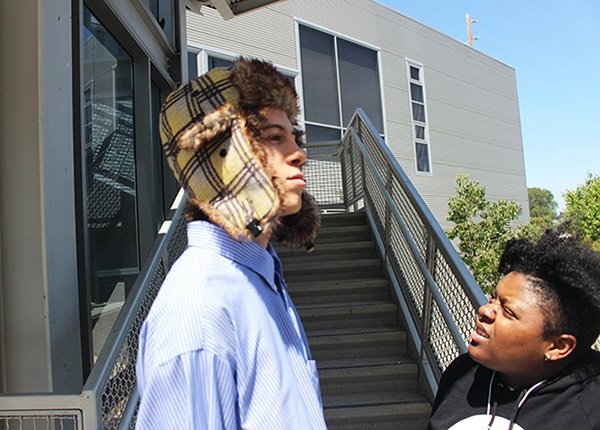 Dakota Higgins and Megan Reed share a moment of levity on the steps of the Galef Art Building. Photo by Lindsey Johnson.