Shifter – What We Can Knot 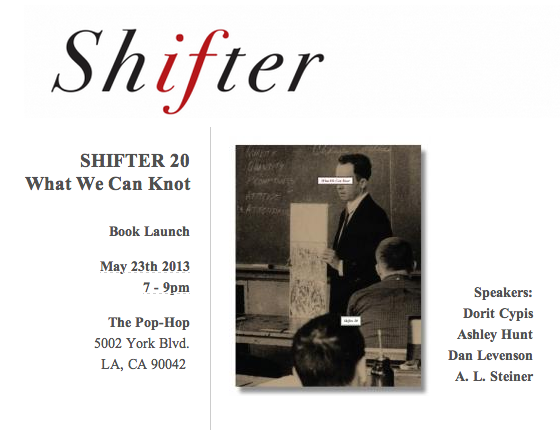 SHIFTER is thrilled to invite you to a book launch, with a series of short presentations celebrating the launch of our twentieth issue titled What We Can Knot. The title of this issue draws from George Bernard Shaw’s quip “He who can, does; he who cannot, teaches.” In this issue artists parse out and challenge what we see to be Shaw’s false distinction between pedagogy and praxis, in order to explore the value of negotiation and collaboration as important elements both in the studio and in the classroom. To this end we have invited several individuals who are both artists and educators, to consider the active relation between art practice and teaching in their life. We have invited them to do this through a conversation or correspondence with either a mentor or a student who continues to play an intimate part in their understanding of the intertwined roles as artist and educator.