The Sighted See the Surface (Studio) 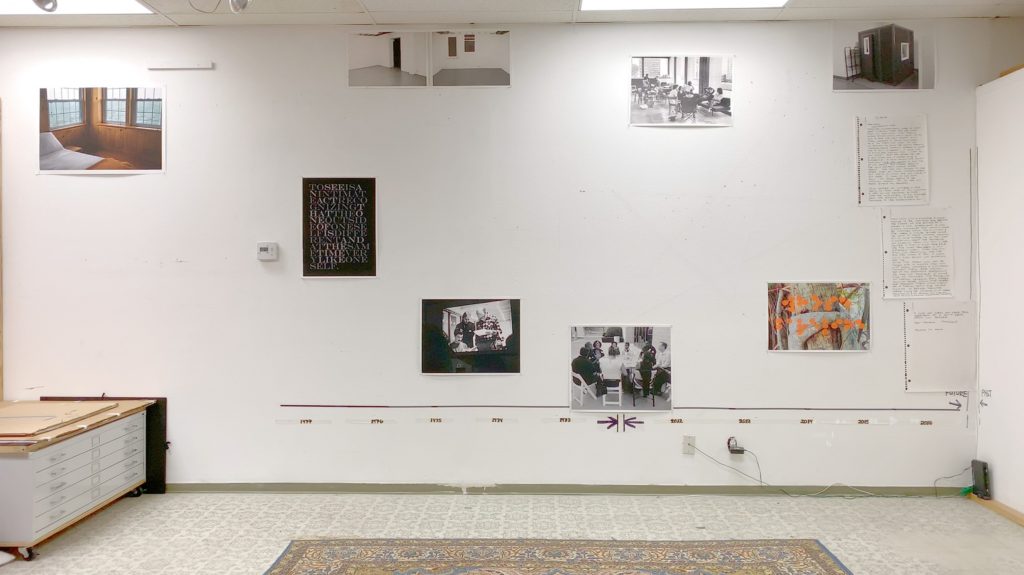 The Sighted See the Surface presents an inquiry into the complexities between sight and seeing, difference, and the psychosocial relations within and between people. By focusing on our physical, psychic and social capacity to “see,” this project has deepened my investigation into aesthetics, ethics and engagement – the roots of my practice since the late 1970’s. The title, borrowed from The Pollution of the I, by Jacques Lusseyran, a blind writer active in the French Resistance during World War II, suggests that what sighted people have in common is their ability to see at least the surface of visibility. As sight is perceptual and subjective, nothing else is assured about what the sighted see – not insight nor hindsight, not recognition nor understanding.

This project is dedicated to the late artist Michael Asher, a mentor and friend of mine since our meeting in 1974, who serves as a catalyst for my embarking on this work. Over his 47 career Asher explored the many ways that the museum and gallery platforms define what is art and how art is perceived. His incisive critique opens our eyes to what we are often blind to – where we are in space and location, how architectural sites frame authority, and what our sensorial and perceptual experience might be. In revealing what is often hidden, his work inspires the individual to recognize their agency in relation to power.

What began as a tribute to Asher, who had died in the fall of 2012, led me on a personal seven- year journey that made me consider experiences dating back over decades. I wanted to understand more deeply both Asher’s thinking and motivations and my relationship to aesthetic and social critique; to trace connections between aesthetic and political questions, inquiries that I am passionate about. As an artist long practicing in the studio and in the street, I craved a synthesis that would support artistic activity and social justice. In 2005, prompted by my continuing research into identity and social relations, I earned a Masters Degree in Conflict Studies: learning procedural and strategic skills of communication and conflict engagement that became part of my artistic practice, and provided deeper insight into our human psyche of sameness and difference. I wondered how I would interweave these two practices. How might my artistic practice connect more fully with the daily social realities of others? What could the role of the artist be in affecting more equitable social relations?

The Sighted See the Surface has evolved over time as a map charting events that seem to rub up against each other like lost pieces of a puzzle or the indeterminate sides of an isosceles triangle. When I began, I remembered my experience of Asher’s 1977 exhibition at the Los Angeles Institute of Contemporary Art (LAICA) where he intentionally left the gallery empty except for an informal arrangement of seating collected from LAICA’s bookstore and administrative areas. Along with other graduate students, I was hired by Michael to sit in this area for several hours a day to greet visitors, invite them to join us and talk. Through Michael’s work, the gallery was recontextualized as an area for public dialogue and the participants became part of the artwork.

Thirty five years later, when I recalled this experience, it triggered a connection: since 2008, I have actively facilitated many public dialogues on critical social issues in public spaces throughout Los Angeles –ranging from conversations between LAPD officers and community members concerned about rampant police violence and racism in the USA and local dialogues on the Middle East conflict between Palestinians and Jews to mediation between politically like- minded Occupy LA participants as different personally as night and day.

It had somehow never occurred to me that the first public dialogue I ever experienced was Michael’s work at LAICA. Although the critical overlap between us was clearly the dialogue form, the critical difference was that Michael’s work, framed within an art institution, emphasized aesthetics, while my work in the public domain, emphasized politics. Early in this journey, my friend and colleague Susan Morgan pointed out that many of the Southern California sites—LAICA, the Los Angeles County Museum (LACMA) — where Asher exhibited his work had been designed by modernist architect William Pereira. As I researched Pereira’s work, I arrived at his Braille Institute for the Blind (Los Angeles, 1974) – a public space designed to accommodate the needs of those who would never see the building. In tribute to Asher, I imagined that I would develop a public dialogue between sighted and non-sighted people at the Institute, alluding to Asher’s 1977 LAICA project as well as to his penchant for making the invisible viscerally visible. Walking into the central atrium of the building, however, I recognized how flawed my thinking was; I knew nothing of the world of those who are sight challenged.

The atrium space was empty and quiet, amplifying the tap-tap-tapping of canes guiding people to their destinations. It was obvious that placing chairs in a space intentionally designed to be left empty would be ridiculous. My plan ended. Instead, I offered to volunteer at the Braille Institute and learn about being sight challenged. Over the next two years, I spent many hours at the Telephone Reader’s Program recording my reading of the daily newspaper for sight challenged people to access via telephone. Although the listener would never see me and I would never see them, we were intimately joined together by a thread: the sound of my voice. I discovered that sight is much more than meets the eye and that human connection requires reciprocity of experiential intimacy. I began a journey into comprehending the resonance of sight and who we can be to each other.

If there is one realm in which blindness makes us experts, it is the realm of the invisible… If we regard blindness as another state of perception, another realm of experience, everything becomes possible… Everything enters into an intimate and active relationship with ourselves: the window, the street, the walls of the room, the furniture, the slight movement of air, living creatures.

During my seven year journey, many other portals of experience beckoned: at the Rauschenberg Foundation Residency Program in Captiva, Florida, I spent weeks wandering the dense jungle while listening to news coverage of police violence and race issues across mainland America; I reflected daily on authority and our human blindness towards one another; it became imperative that I learn to read and write visual Braille, an oxymoron that fascinates me; in my studio I created eye charts of text prints which beg our ability to see/comprehend human relations; and I continued to facilitate dialogue across insistently blind differences between LAPD officers and community members. When I was shown a 1976 letter handwritten by Michael, I saw that he had described our relationship as one of reciprocity.

As these portals rubbed against one another and found odd alignments, I learned that it is the lived time and space between aesthetic and social experiences that matter most — time and space of reflection, nuanced sensation, connection and meaning. Perhaps in the end it is the word reciprocity that best describes what inspired me on this voyage, looking for unspoken equivalencies, exchange and empathy.

The installation of The Sighted See the Surface, a transmogrification across time and social relations, includes 9 documentary photographs, which perform as portals into 9 experiences, and a 20 minute projection animation of video mapping and spoken sound track over the photographs, which connect them.

The publication of The Sighted See the Surface, produced by LM Projects, presents a book collage made of overlapping pages of images and text reflecting the journey. Each reader will perform an unwinding of the stories and circumstances that underlie this project’s breadth. What do you see beyond the surface?