Welcome the Stranger: An urban installation for social engagement 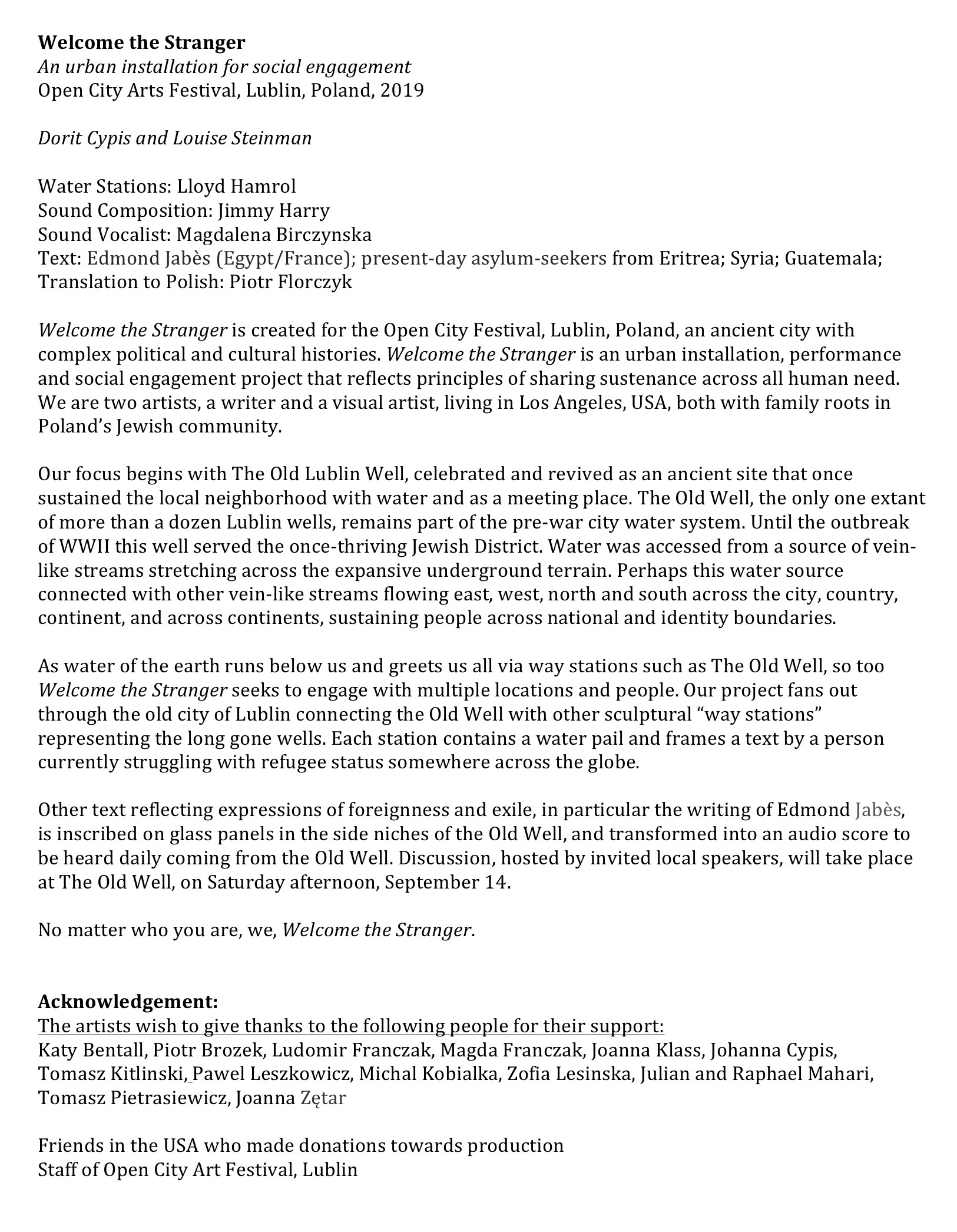 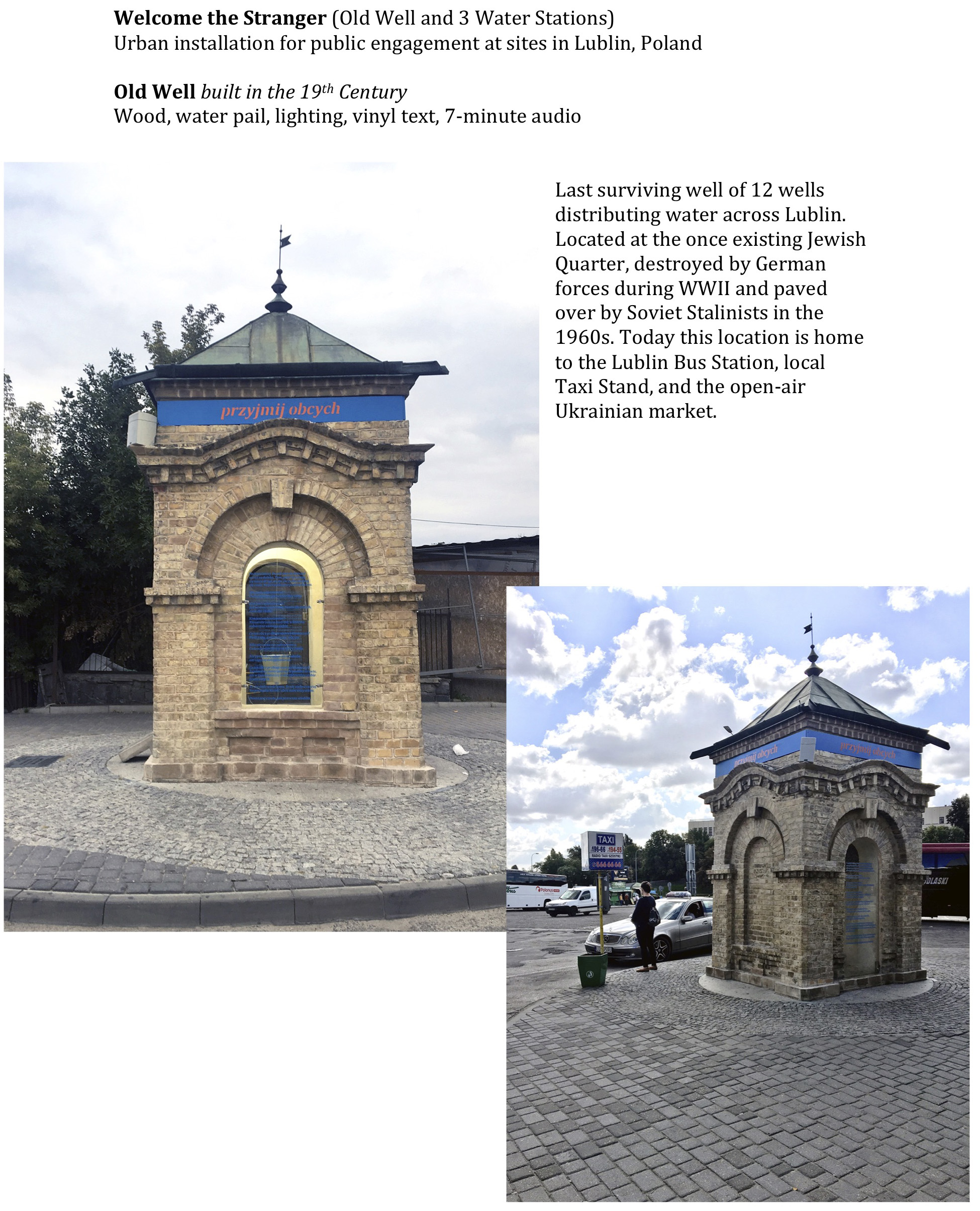 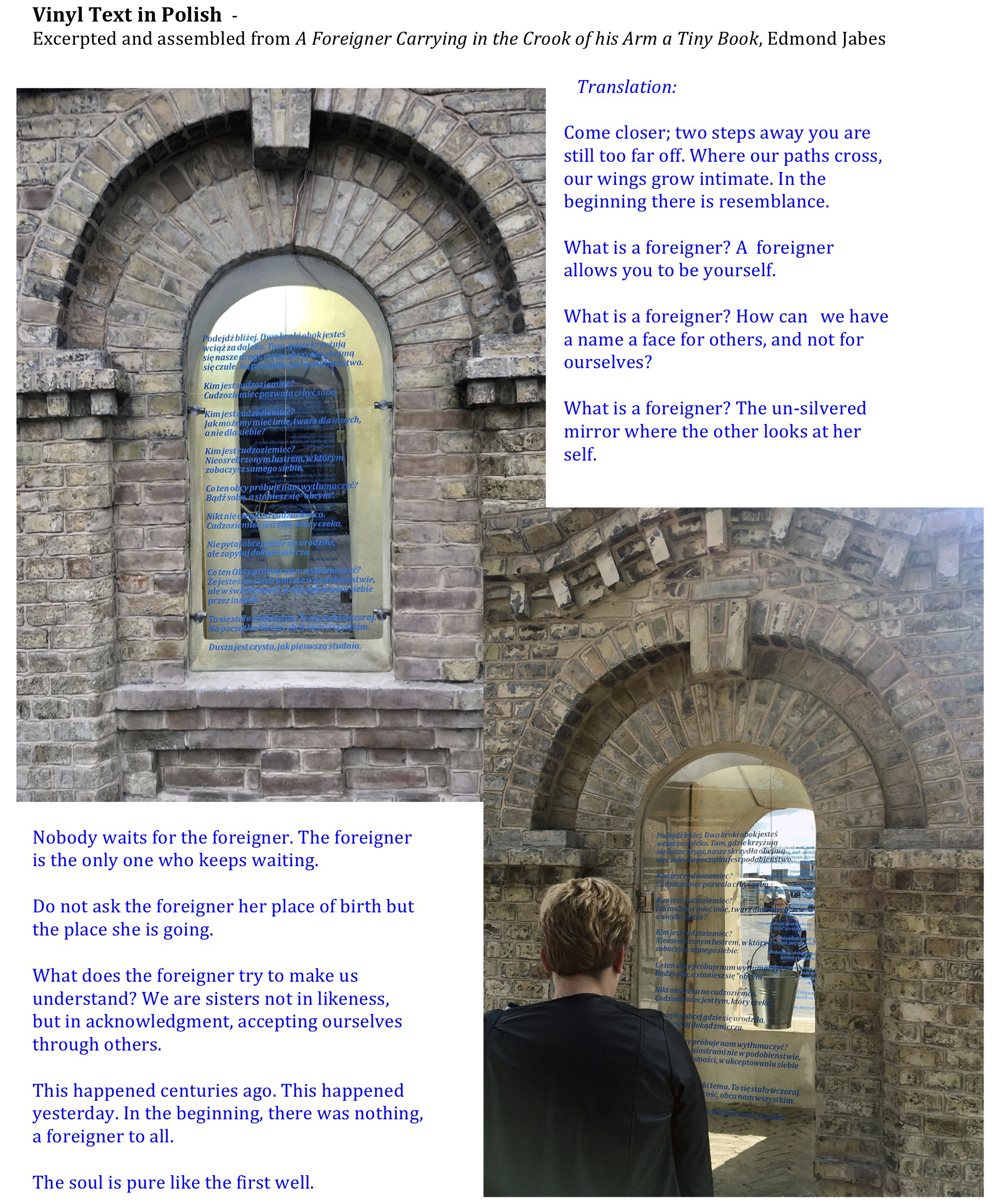 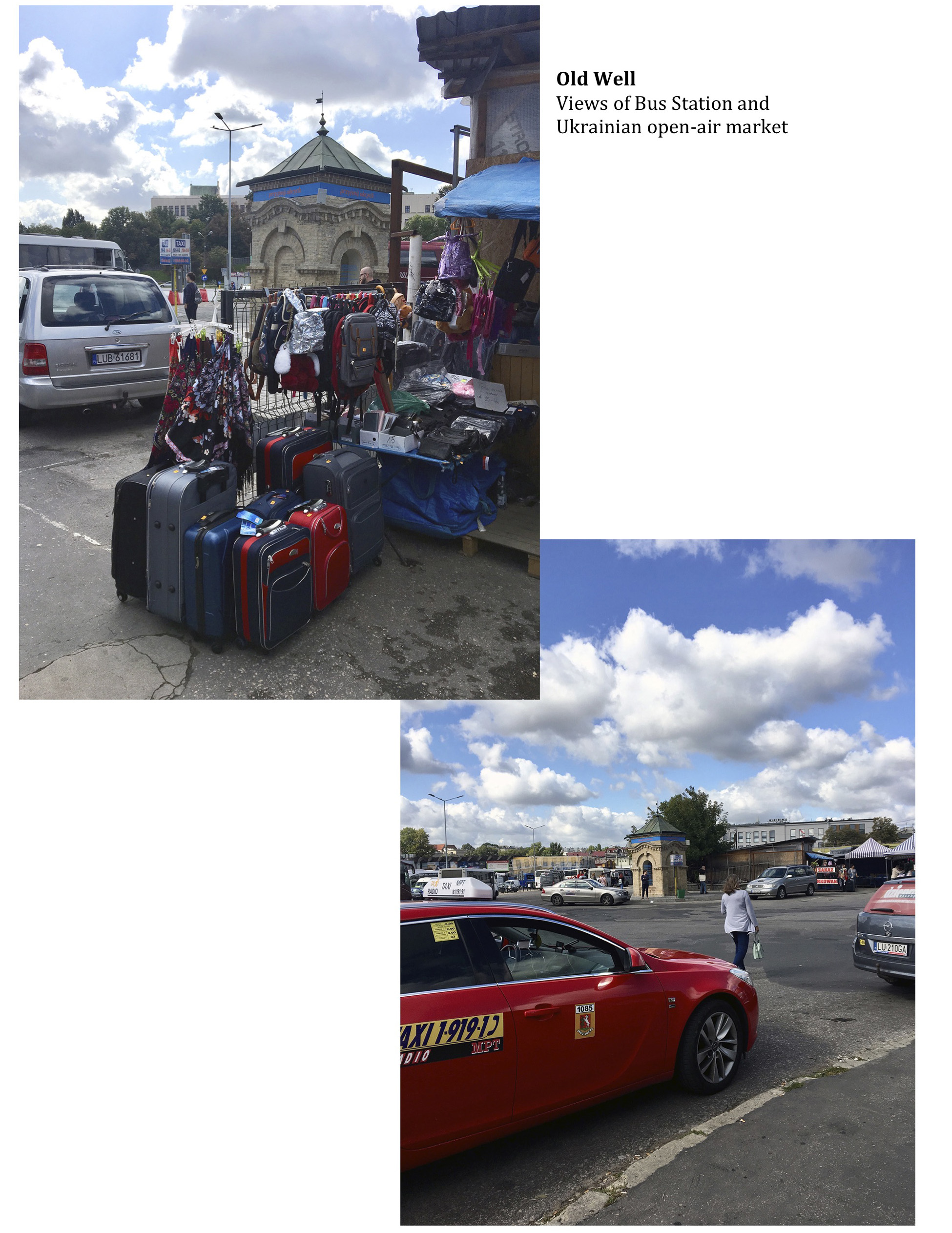 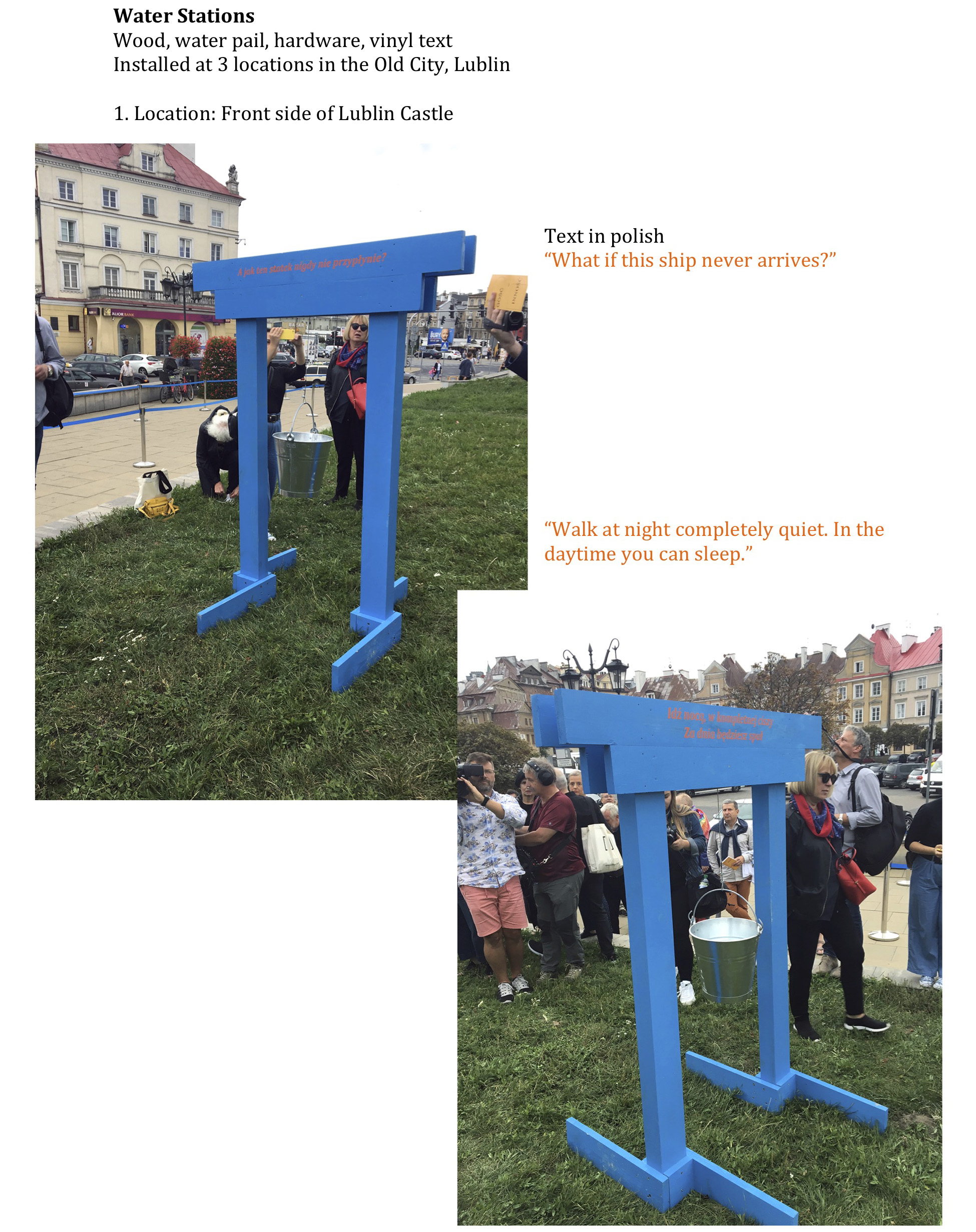 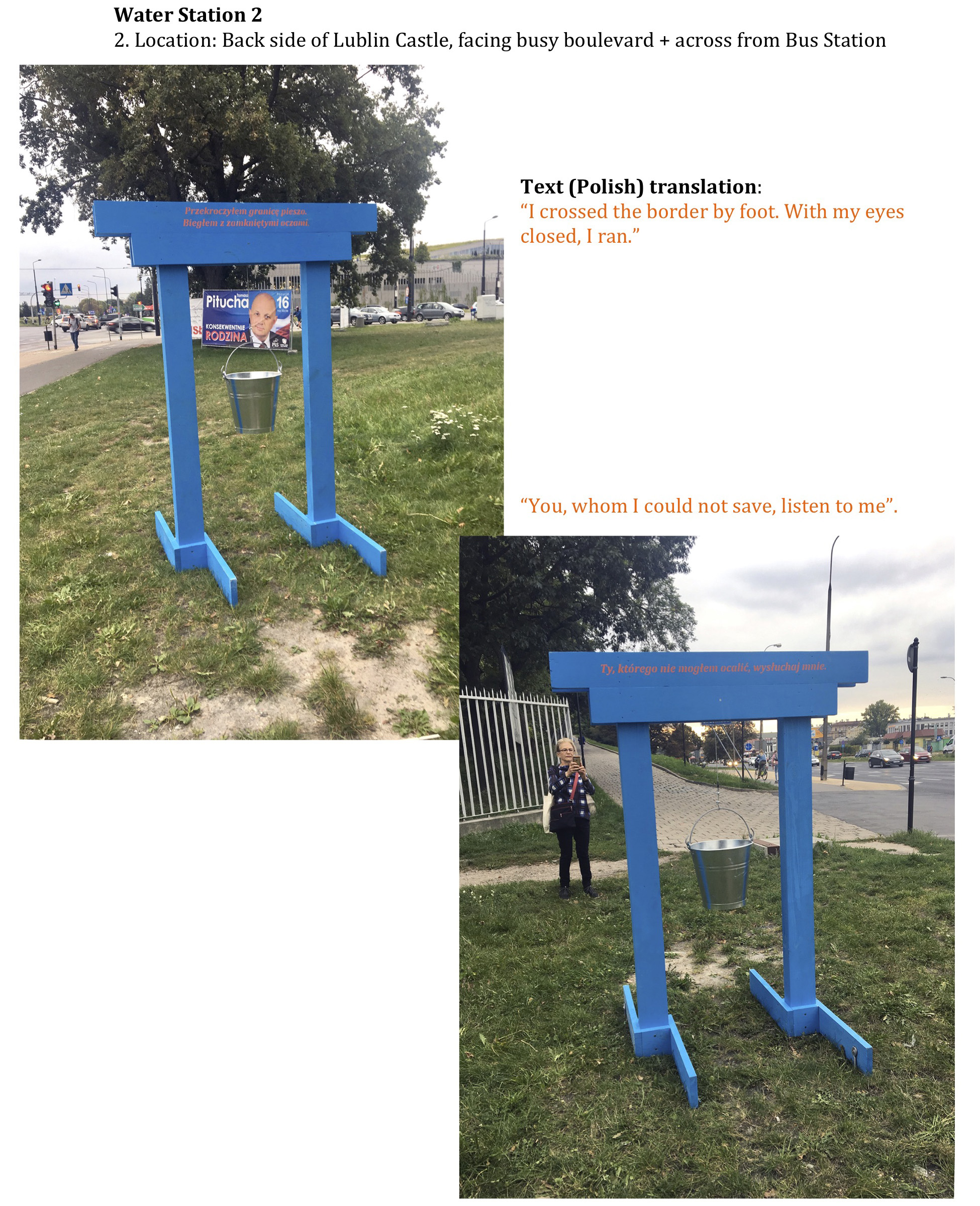 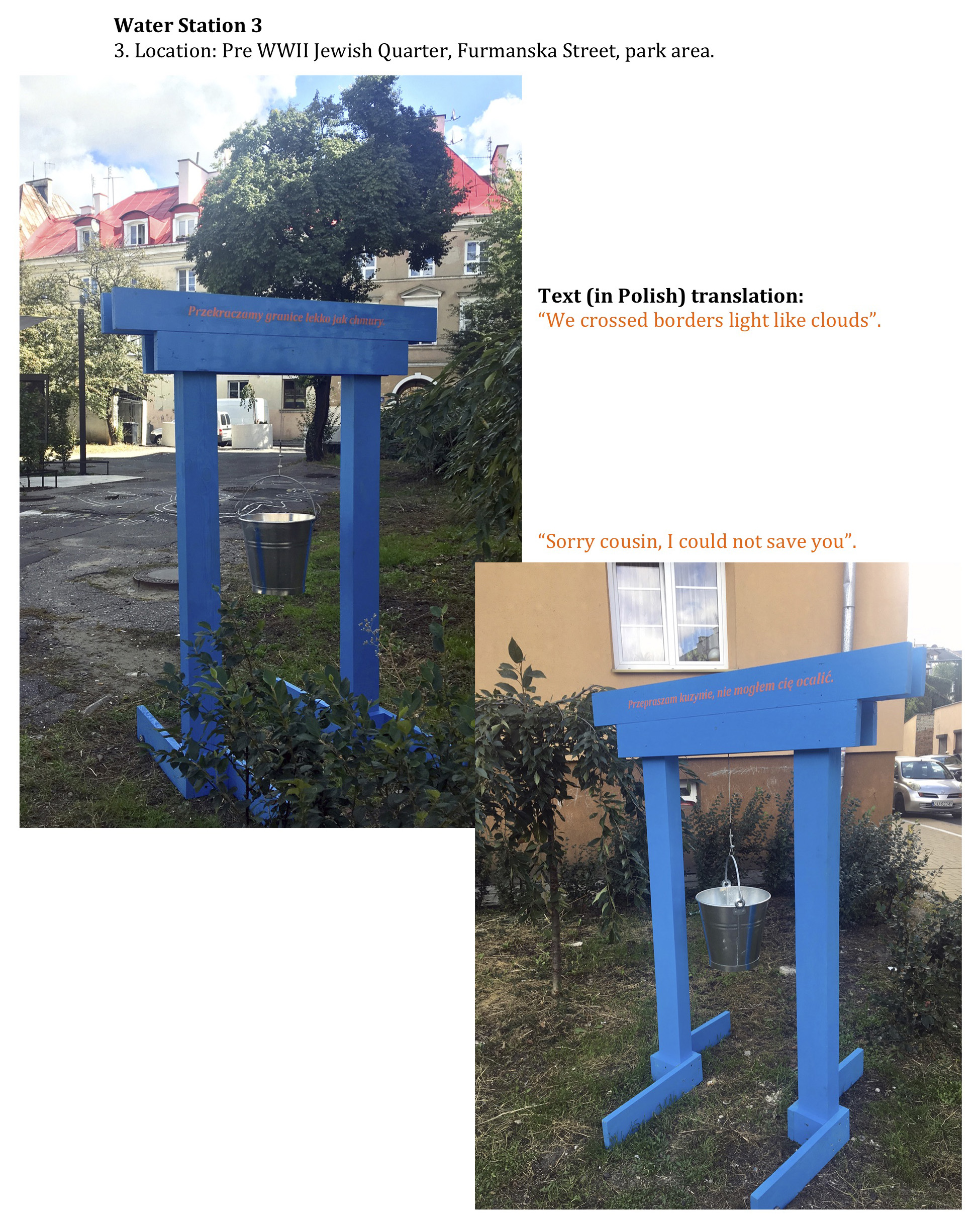 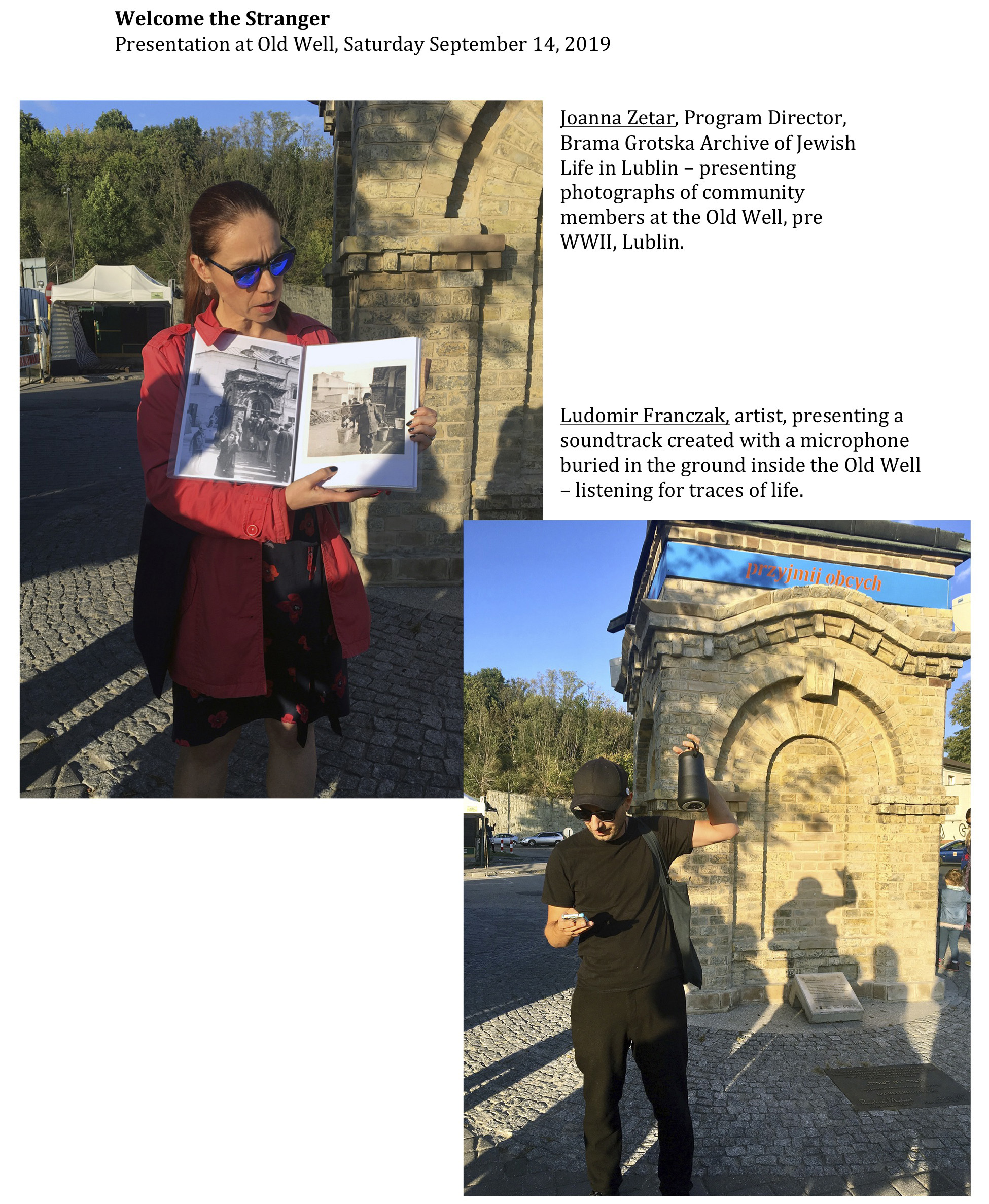 Dear All, you are cordially invited to take action with us in the OPEN CITY. Action! Let’s practice hospitality-to-the-other: let’s open the city. Lublin is and has always been hospitable. Etymologically, it is a city of love. Through our co-creativity, the Lublin Festival becomes a beating heart of culture – towards the democratic future of the Lublin hospitality.

Via international art, 11th edition of Festival of Art in Public Spaces OPEN CITY explores hospitality-to-the-other, grounded in the history of Lublin, and, above all, in its presence and future, and which is created by us here and now. Hence, the social involvement of this year’s projects. Hospitably, the OPEN CITY creates – through public art – a new polylogic urban community, the agora of a debate on the society’s condition and its hospitality-to-the-other. Let’s hold this polylogue in Lublin by means of public art. In our curatorial work, aesthetics is always combined with ethics, and poetics with politics; creative output forms democracy, the internal one, in ourselves and in Lublin, in Poland, in Europe, on the Earth. We create together for the repair of the world and of ourselves: tikkun olam – the repair of the world in Hebrew…

The open society of Bergson and Jaspers, Hanna Arendt’s action, hospitality-to-the-other at the dawn of manifold cultures – these are our inspirations which we hand in to you. The event gathers men and women, artists, citizens, refugees, people with disabilities and other minorities. The Festival aims to promote diversity in the city, and the exhibition is the forum of reflection on the human rights and their execution.

Our modern discovery of hospitality is the restoration of the Renaissance when Lublin flourished – a new Lublin Renaissance of artistic and civil culture. Through art, we want to create a region which welcomes Everybody, which is open to foreignness and otherness; we hope to build again a blooming city which opens, and not closes the European Union. We demand that Lublin become welcoming again as it has been for centuries when different cultures, religions and atheisms coexisted here. Let the Lublin Province accept itself as a space of democratic diversity, and then it becomes again a planetary centre of hospitality-to-the-other.

World cultures postulate hospitality-to-the-other. Hospitality can be found at the basis of numerous civilisations: from the Hebrew Bible, through the New Testament, Quran, and Gilgamesh, Mahabharata and Ramayana, the Japanese concept of omotenashi, to the classics of philosophy: Immanuel Kant, Emmanuel Levinas, Jacques Derrida, Hélène Cixous, Zygmunt Bauman, Cezary Wodziński and Julia Kristeva. The latter stands for humanism: “let’s dare to try humanism”, says Kristeva. In Norman Bryson’s view, the Greek philoxenia consists in loving what is strange. “The inclusion of the other”, as Jürgen Habermas postulates in the title of his book. The fantastically prepared entry “hospitality” in the Catholic Encyclopaedia published in Lublin contains a chapter “Hospitality in the Polish culture”. The OPEN CITY challenges the hospitality of Lublin.

Because Lublin is a soci-able place – a Jewish, Romani, Ukrainian, Russian, Polish, female and LGBT city. There is no light without darkness, though, so also here the hostility of neo-fascism and xenophobia is creeping in. And Lublin is a place of reconciliation, connection and

freedom. Hospitable unions bring peace and democracy to Lublin: the 16th century Reformation, the Lublin Union with Lithuania of 1596 (the anniversary of which we are celebrating this year), the Interim Government of the night of 6 to 7 November 1918, the European Union from 2004. The European Union introduces the prohibition of discrimination in its Charter of Fundamental Rights – and this is hope for anti-fascist Lublin.

Lublin is a city of unions: in such a manner we refer to the previous edition of the OPEN CITY, curated in 2013 by Anda Rottenberg. For so many years, this festival of art has been opening the city, its residents and guests to the otherness of contemporary art and the positive and welcoming ideas of democracy. We are happy that we ourselves are becoming guests in this house of strong foundations.

And it is an iconic house: Lublin itself appears in the world philosophical literature in Leibniz’s and Grocjusz’s writing. It features strongly in the Noble Prize Winner Isaac Bashevis Singer’s oeuvre, as well as in women’s creative output. We find it in the works of Narcyza Żmichowska of Lubelszczyzna, the author of “the most passionate affair between women”, as described by Boy-Żeleński, or Anna Langfus’s, a Prix Goncourt laureate born in Lublin, and in the homoerotic poetry of the Lublin resident Józef Czechowicz, who also passionately photographed the Jewish Quarter in Lublin.

In the OPEN CITY, both male and female artists explore this heterogeneousness of Lublin, its socialness. It is not easy – hospitality-to-the-other requires effort; hostility is simple and easy. The French philosopher Jacque Derrida’s neologism l’hostipitalité, i.e. “welcome and hostility”, exposes the dialectics of hospitality and hostility, their co-dependence, struggle, which we know so well from the surrounding city and the world.

The Operation Reinhardt and the lethal “solution of the Jewish question” were managed from Lublin. It was the greatest genocide in the history of humanity. The traces of this unspeakable hostility can be found around Lublin. Therefore, we bear a special responsibility for maintaining the civilisation of hospitality-to-the-other. Demons do come back: there are still active politicians in Lublin who campaign against Ukrainian students and workers, Chechen refugees or the young LGBT community demanding safety in their own city. The recent March for Equality in Lublin, organised voluntarily and attacked, has confirmed that the residents are not indifferent to what happens around them. We believe that the artistic pretext for reflection will unleash a social avalanche, noticeable also when the event finishes. Lublin needs hospitality-to-the-other to save itself and to become a truly open city in a hospitable polylogue.

The 11th edition of Festival of Art in Public Spaces OPEN CITY is exceptional. All the more so as 2019 is also the anti-fascist year and the anniversary of the Lublin Union of Poland and Lithuania. For these reasons we emphasise the tradition of hospitality-to-the-other. Lublin used to be an important centre of tolerance: In 16th century it was a centre of Protestantism and the Polish Brethren; also, Eastern Orthodox Christianity and the Greek Catholic Church flourished here. During the Interwar Period, the progressive Polish Socialist Party and the Jewish party Bund operated here, and under the Pseudo-communist regime, a democratic opposition developed in Lublin.

For, etymologically, Lublin is a city of love. Varieties of love! Lublin has been a common city of majorities and minorities, of KUL (the John Paul II Catholic University of Lublin) and the Yeshiva of the Sages, wise women and creative gays, great philosophers and courageous cleaning ladies who assert their workers’ rights, of the party Bund pursuing equality, as well as of commitment to traditions. Traditions – always in plural, as we are heirs to a multitude of heritages.

Our city used to be a kaleidoscope of numerous identities. Will cultural, social and love pluralism return here? Our art aims at social change. We care about a culture of participation shared by citizens, refugees, people with disabilities, people from all over the world, hetero- or homosexual. All Lublin residents and their guests should have equal rights, regardless of their places of origin or the colour of their skin. The ideals of the OPEN CITY are freedom and diversity, hence, we act intersectionally. Today, these simple and obvious models are the most challenging ones. In his lectures, prof. Cezary Wodziński emphasised the partition “inność” (“otherness”) in the word “gościnność” (“Hospitality” in Polish – untranslatable pun). Since the publication of the book and two editions of the exhibition Love and Democracy, we, who are involved in Lublin, have also underlined that fact. Our exhibition is embedded in contemporary thought, and, above all, in contemporary activity, action and actionism, both philosophical and actual. Hannah Arendt affirmed action, activeness for democracy. The OPEN CITY is an action in Lublin.

The list of invited artists in not accidental. We invite creators who will offer a new common understanding of public space. We connect the local community and international movements. We emphasise gender parity and aim to present various areas of creativity. The binder is the social engagement of the creators of OPEN CITY. We hope to meet all these who are or will be active in the city space. The idea of the Festival connects the past with the present and shapes the future. Hence, we will see installation and actions by the artists who refer to the cross-cultural past of Lublin and its present diversity.

To our common table, debate and the experience of hospitality-to-the-other with the Lublin residents and guests, we have invited artists with the following artworks in the city centre. This year, the participants of the parade opening the Festival – when we wander from one artwork to another – will receive t-shirts with an anti-fascist logo created by Jeremy Deller. Through luminous slogans put on historical buildings, Krystyna Piotrowska and Grzegorz Bibro affirm the ambiguous word itself and the idea of hospitality-to-the-other, its linguistic, psychological, biblical and contemporary implications. Rafał Jakubowicz’s neon, Dorota Nieznalska’s sculpture and Louise Steinman’s and Dorit Cypis’s installation refer to the Jewish tradition as well as the Jewish present day of Lublin. The issues related to emigration, refuges and multinational society are addressed in the sisters Anna and Irena Nawrot’s, Dawid Marszewski’s and Tytus Szabelski’s surprising artworks. The installations by Paulina Piórkowska (in cooperation with the Lublin Equality March Association), Mariusz Tarkawian and Izabella Gustowska comment on the situation of the LGTB community in both contemporary and historical Lublin. It is the most current topic, testifying to the condition of the Polish democracy and the attitude towards otherness. Moreover, there is Krzysztof Wodiczko’s touching projection about the consequences of war, i.e. the disappearance of hospitality, and an imaginative installation by a pair of the Lithuanian artists Svajone and Paulius Stanikas concerning the Lublin Union. Finally, the architect Adrien Sina and sculptor Dariusz Sitek put real, but at the same time extraordinary tables – with direct associations of receiving a guest, as well as with deliberative democracy – in the heart of Lublin. In such a manner, our concept of art and hospitality-to-the-other is engaged in creating a free, just, egalitarian and common public space of the OPEN CITY.

Open the city! Here, we are opening Lublin. Together. From the bottom our hearts and the heart of the city. From the past and the present of creativity. Towards the future.